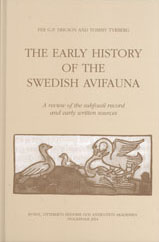 This book summarizes the history of the Swedish avifauna based on early publications and manuscripts (mostly written before AD 1800), as well as data obtained from archaeozoological analyses of bird remains recovered from more than 500 archaeological and natural deposits. The evolution and distribution of the Swedish bird fauna during the 14,000 years since deglaciation began are outlined based on these data.

The results show that a large proportion of the species that inhabit Sweden today seemingly immigrated quite soon after the ice withdrew. The most important route of immigration was from the south and west, but later immigrants also followed northerly or easterly routes. Some species, traditionally regarded as very late immigrants (e.g., Mute Swan, Pochard and Partridge), are shown to have bred in Sweden for several thousand years. Other species, such as the White Stork and Black Stork, have no subfossil record and are suggested to have immigrated after the medieval period. The book also includes chapters on the history of domesticated birds and prehistoric falconry in Sweden.