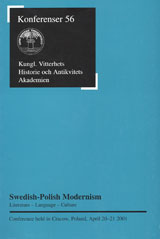 The articles published in this volume were presented at the joint Swedish-Polish conference entitled "Swedish-Polish Modernism. Literature - Language - Culture" that took place in Cracow, Poland, April 20-2 1, 2001.

Even if Swedish - or in a wider perspective - Scandinavian literature at the turn of the twentieth century was one of the most important sources of inspiration for Polish modernism, modernism still constitutes an interesting but at the same time somewhat unclear and problematic phenomenon for Swedish and Polish researchers. Both in Swedish and Polish literature - but for completely different reasons - there is an ongoing discussion about not only the origin, features and different periods of modernism, but also its actual existence and effect on the cultures and literatures of both countries. One of the goals of the conference therefore was to answer some of the important questions regarding the relation between, for example, modernism and avant-garde; modernism and modernity; and modernism and post-modernism etc. The contributions to the conference deal not just with modernism in the cultures of the two countries, but also, and above all, with the nature of modernism in the literatures of neighbouring countries, that is, Swedish, Polish, Finland-Swedish and, in one contribution, Russian modernism, all seen from a Scandinavian and a Polish perspective.