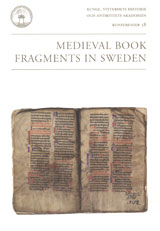 IN THE NATIONAL ARCHIVES in Stockholm is preserved the largest collection of medieval manuscript fragments in Northern Europe, around 22 500 book fragments taken from more than 6 000 manuscripts. All of them were used as wrappers of accounts of the local and central administration of King Gustavus Vasa and his sons ca 1540-1630. A project of cataloguing these fragments has been recently completed resulting in a database catalogue.

The seminar papers presented in this volume range over a great number of issues based on the Swedish fragments. Three papers deal with early English fragments in the collection and their place in Swedish and English cultural history. One paper discusses the fragments of Canon law manuscripts, another deals with liturgical manuscripts in Church Slavonic found among the fragments, a third investigates the offices of Scandinavian saints represented there. One paper deals with works of philosophy and theology found both in Swedish and Finnish fragment collections.