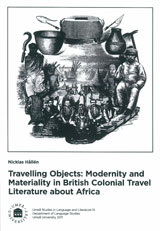 This study examines the functions of objects in a selection of British colonial travel accounts about Africa. The works discussed were published between 1863 and 1908 and include travelogues by John Hanning Speke, Vemey Lovett Cameron, Henry Morton Stanley, Mary Henrietta Kingsley, Ewart Scott Grogan, Mary Hall and Constance Larymore. The author argues that objects are deeply involved in the construction of pre-modern and modern spheres that the travelling subject moves between. The objects in the travel accounts are studied in relation to a contextual background of Victorian commodity and object culture, epitomised by the 1851 Great Exhibition and the birth of the modem anthropological museum. The four analysis chapters investigate the roles of objects in ethnographical and geographical writing, in ideological discussions about the transformative powers of colonial trade, and in narratives about the arrival of the book in the colonial periphery. As the analysis shows, however, objects tend not to behave as they are expected to do. Instead of marking stable temporal differences, descriptions of objects are typically riddled with contradictions and foreground the ambivalence that characterises colonial literature.