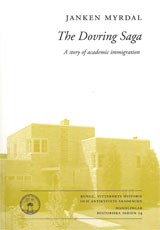 The Dovring Saga – A story of academic immigration

Every life reflects the history of its period and will reveal something about society as a whole. The reader will find a similar use of a life-story here.

The subject is Folke Dovring, who around 1950 tried to introduce new ideas about history based on statistical analysis and history from below. His attempt was made in vain and he was rejected by the Swedish academic community. Leaving Sweden in 1953 for an international career, in 1960 he became a tenured professor of Agricultural Economics at the University of Illinois, Urbana-Champaign.

Some major societal processes can be studied through the biography of Dovring. One involves European conservatism in the academic world. His early focus on quantitative history and history from below led to his rejection. The second important process Dovring took part in was American expansion in the intellectual world system. Dovring was one of the many scholars who left Europe in the 1950s to join the dynamic American academic community, a pattern of intellectual immigration. When he later shifted focus from agrarian history and took up more political questions in the 1970s, such as the oil crisis and environmental care, his position became more isolated.

JANKEN MYRDAL has been Professor of Agrarian History at the Swedish University of Agricultural Sciences, Uppsala, since 1994. His research centres on agrarian change in medieval and 16th century Sweden. Furthermore, he has worked with modern agriculture. He is a member of several learned societies including Kungl. Vitterhetsakademien.