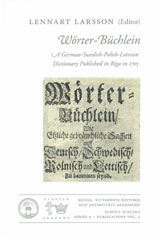 The volume includes a comprehensive introduction presenting the structure of the dictionary and examining it from a user perspective: For whom was it intended? And how could it have been used? It also deals with the genesis of the dictionary, discussing which earlier dictionaries served as its models, as well as the role of the printing house and of the Latvian clergyman and writer Liborius Depkin, to whom the dictionary has traditionally been ascribed.

In separate chapters each one of the four languages in the dictionary is then discussed more in detail, focusing on various lexical, morphological, phonetical and orthographical features, as well as on the origins and sources of the respective vocabularies.

This is followed by a reproduction of the dictionary text, and facsimiles of some selected openings from Wörter-Büchlein.