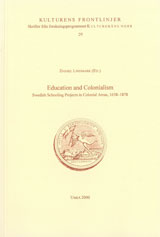 Swedish colonialism had considerable breadth in both time and space. This book examines the educational measures that were taken in three major areas of Swedish colonial interest: New Sweden in the Delaware Valley in North America (1638-1773), Saint-Barthélemy in the Caribbean (1784-1878), and Sápmi, the Saami area in northern Scandinavia (18th century). Three scholars at Umeå University present three different images of the function of education under varying colonial circumstances.

In the Delaware Valley, Swedish education was aimed at maintaining Swedishness among a diaspora population. In the 18th century, Swedish-Lutheran instruction was replaced by Pietist-Lutheran and eventually American utilitarian schooling philosophy. In the non-settler commercial colony of Saint-Barthélemy, Swedish authorities supported schools of varying ethnic and denominational affiliation. In combination with the socio-economic and ethno-religious division between rural and urban areas, this policy contributed to creating an educational landscape characterized by cantonization.

Schooling among the Saami is analyzed in the perspective of integration. The Saami school system of the 18th century functioned as a Pietist institution of indoctrination. In the colonial setting this evangelical curriculum acted as a colonial curriculum, just as was the case in the schools of Saint-Barthélemy. The Swedish language policy in Sápmi served the purpose of religious integration by encouraging the use of Saami languages in education and religious service. The shift from Saami to the Finnish language in the northern part of Sápmi was directed by practical rather than ideological motives.

This book contains three essays, one on each area of investigation. in an introductory article some background facts are provided, and comparative perspectives are applied The general conclusion of the project is that Sweden was a colonial power using education as an instrument of colonization by employing colonial curricula.

The project Education and Colonialism has enjoyed financial support from the Bank of Sweden Tercentenary Foundation.