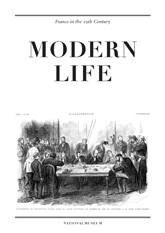 The years between the French Revolution in 1789 and the outbreak of the First World War in 1914 were a turbulent time. Wars and uprisings were succeeded by political reforms and emerging democracy. Society was also being transformed by new technology. Factories and railways were built, and people were moving to the cities from the countryside. The Eiffel Tower was erected in Paris in 1889, as a monument to the new France.

These changes led to different perspectives on mankind and society. Commerce and nightlife blossomed in the cities, while the people there began to long for nature and life far from the bustle and clamour. All these factors influenced art, and art in turn contributed to shaping society.

In all the arts – architecture, painting, sculpture and the applied arts – old traditions were replaced by new ways of reflecting and interpreting the era. Realism, plein-air painting and impressionism were innovative expressions in painting. The applied arts and the crafts industry reinvented traditional designs and took inspiration from nature. Photography and film made their way into French culture.

In the late 19th century, many Swedish artists were drawn to France. Their links with the French art scene were to have a crucial impact on the oeuvres of many Swedish painters, sculptors and craftsmen, and this is why they are also included in Modern Life. France in the 19th Century.