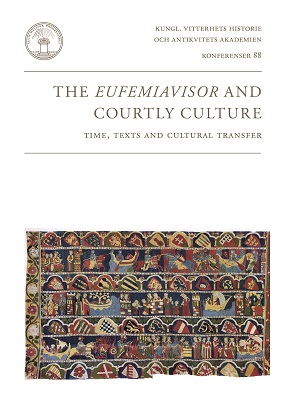 The Eufemiavisor and Courtly Culture – Time, Texts and Cultural Transfer

The present volume contains proceedings from the symposium The Eufemiavisor and Courtly Culture – Times, Texts and Cultural Transfer, held in Stockholm in October 2012. The conference was attended by a wide international audience from the Nordic and European countries as well as the USA, and drew attention to the three Old Swedish chivalric verse narratives Herr Ivan, Flores och Blanzeflor and Hertig Fredrik av Normandie, commonly known as the Eufemiavisor - Songs of Eufemia – and their historical and cultural contexts.

The contributors give new perspectives on these texts and their times from a wide range of disciplines, such as history, Old French and Old Norse philology, translation studies, art history and philosophy. Some of the contributions bring forward different aspects of the courtly culture and the audience of the Eufemiavisor, while some deal with the relations between the Eufemiavisor and the historical situation in which they emerged. Others focus on the texts themselves and the processes which formed them, and some discuss and investigate text history, for example how the different texts evolved and the emergence of a Swedish literate culture. The volume closes with an overview of manuscripts and early prints containing the Eufemiavisor and the content of each manuscript together with a bibliography of editions.