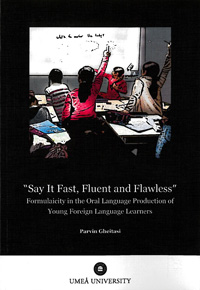 This thesis reports on a study, which investigated the process of early foreign language learning in a classroom context and the functions of multi-word units of language known as formulaic sequences in the oral language production of young foreign language learners. A classroom with 11 students in the age range 9 to 11 years was observed and video recorded for 16 sessions (90 minutes per session). The observations were accompanied by two elicitation tasks. 10 sessions out of the 16 sessions of the collected speech samples were transcribed chronologically. In the next step, formulaic sequences were identified based on pre-established criteria, which were further developed during the analysis. The data was analyzed in order to identify the functions of formulaic sequences in learners' oral language production in addition to the inter-learner variations in the application of formulaic sequences for different functions.