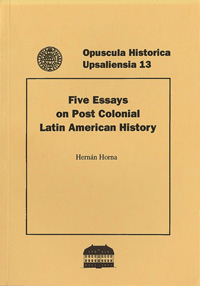 The complex, baffling and exotic events of recent Latin America challenge conventional wisdom. Latin America's labyrinthine diversity is in a state of continual flux. Even though, Latin America's level of economic modernization places it within the confines of the Third World, the region has direct historical links to the North Atlantic industrial economy. Contemporary socio-political issues demonstrate that Latin America has not lost its colonial heritage or liberated itself from the burden of underdevelopment. It has been unable to seize its own destiny. The extreme affluence of the ruling elites as well as the poverty and misery of the lower classes are the most outstanding characteristics of a continent endowed with abundant natural resources. But even the most unexplored and remote frontiers already have their legal claimants. The present volume is an effort in synthesis, and written for anyone with a serious interest in Latin America.

Hernán Homa is Docent in history at Uppsala University. Among his publications are: Colombian Archival Sources On Colonial Peru (1971), Hacia Una Historia De La.s Antiguas Civilizaciones Americanas (1984), Transport Modernization and Entrepreneurship in Nineteenth Century Colombia (1992). He has contributed articles to America Ind(gena, Journal of Latin American Studies, The Americas, and The Journal of Developing Areas.