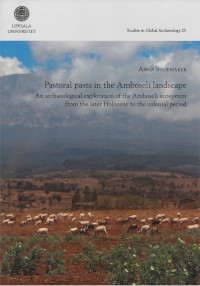 The Amboseli ecosystem, home of Amboseli National Park, is renowned for its extraordinary biodiversity, and has long drawn the attention of conservationists and ecologists hoping to safeguard the healthy functioning of this Kenyan rangeland and the pastoral traditions that have brought this landscape into being. There is major concern currently however, as present day Amboseli pastoral livelihoods are said to be in decline owing to rangelands being settled, fenced, and converted to farmland. The processes by which pastoral livelihood diversification is occurring in this landscape have historical roots, and appreciating this context is an important component of understanding current trends in socio-economic and environmental adaptability and sustainability. Yet, the human history of Amboseli’s ecosystem tends to be conceptualised and discussed by scholars in terms of a narrow and ahistorical model of subsistence-based pastoralism. The research presented in this thesis provides an alternative history of pastoral pasts in Amboseli.

In more specific terms, the primary focus of this thesis is detailing and analysing the results of archaeological surveys and the excavation of ten sites located on Olgulului/Ololarashi group ranch, an archaeological terra incognita. These date to varying stages of the last few millennia. Inspired by the interdisciplinary approach of historical ecology, these exploratory archaeological findings are contextualised and integrated with archival, palaeoenvironmental, ecological, linguistic, and local knowledge sources. In doing so, I present a culture history of Amboseli, and an examination of the evidence for livestock herding in this landscape organised into three parts: the mid-Holocene arrival of domestic stock and emergence of specialised pastoralism; the Early to Late Iron Ages; and finally, the 19th century and colonial period. Throughout these chapters, a continuous theme discussed is the multitude of ways in which cultivation and trade have featured in the Amboseli landscape and contributed to the livelihoods of pastoral people inhabiting this ecosystem. In delving into the history of pastoralism in Amboseli, it is apparent that both its occupants’ livelihoods and the landscape itself must be understood as having been shaped by a heterogeneity of economic pursuits and resource use strategies.