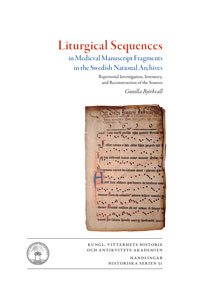 Liturgical Sequences in Medieval Manuscript Fragments in the Swedish National Archives – Repertorial Investigation, Inventory, and Reconstruction of the Sources

In Europe, throughout the Middle Ages, a sequence was sung before the reading of the Gospel in the Roman Mass at the most prominent feasts of the liturgical year. The genre is remarkable through its often large scale compositions, poetic language and peculiar melodies. Different liturgical traditions gradually developed their own sequence repertories, with different stylistic forms.

The scarcity of preserved manuscripts has long impeded an assessment of the diffusion of the genre in Sweden. This situation radically changed with the recent cataloguing of numerous parchment leaves cut from medieval books and used in the binding of 16th century accounts, during the reign of Gustav Vasa and his sons. In spite of their fragmentary state the leaves contain a surprisingly rich sequence material.

The first part of this volume focuses on the repertories, listing all the sequences found for each specific feast. If possible, both the earlier European and later Swedish transmission of a sequence is sketched.

The second part is an inventory and close description of all the fragments containing sequences. The fragments date from the 12th through the 15th century, originating above all from sequentiaries, graduals or missals.

The enclosed cd contains about 2 060 images covering the entire sequence material used in the investigation.

GUNILLA BJÖRKVALL is Dr. Phil. in Latin. She is Former Senior Lecturer (1988–2007) at Stockholm University, and Former Researcher (1995-2004) at the Swedish National Archives, cataloguing medieval fragments used as covers for sixteenth century accounts. She is currently engaged in the Corpus Monodicum project, Würzburg University, as text editor.