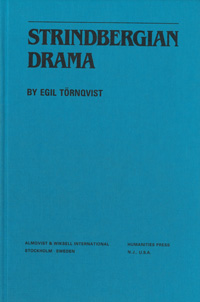 "The last undeniably great playwright"-thus Eugene O'Neill characterized Strindberg in the 1920's. Since then Strindberg's enormous impact on modern drama has become generally recognized. Apart from O'Neill, playwrights like Synge, Williams, Albee, Adamov, Beckett are greatly indebted to him.

Yet surprisingly little has been done so far to throw light on the inganious construction of Strindberg's plays, to explain their remarkable power to hold audiences for mora than a hundred years. In his scrupulous examination of ten of the best known dramas prof. Törnqvist has ventured to fill this gap.

But the book is not only a valuable study of the structure and texture of Strindbergian drama; with its variety of penetrating analytical approaches it is, in fact, relevant to the study of (modern) drama in general. In this way it serves as a welcome contribution to a relatively new area of research: the methodology of modern drama analysis.

Despite its scholarly preciseness, prof. Törnqvist's book is extremely readable, of great interest both to the initiated and to those who believe that the best of modern drama concerns us all.