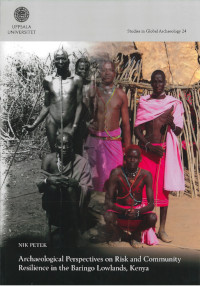 Archaeological Perspectives on Risk and Community Resilience in the Baringo Lowlands, Kenya

This historical ecological research provides a detailed insight into the risk avoidance and resilience building strategies in the Lake Baringo basin in Kenya through the lens of archaeology. It explores how changes in subsistence, habitation, and landscape shaped each other and how that affected the available strategies of risk avoidance and resilience building. While the focus is on the history and archaeology of the Ilchamus, a Maa community currently occupying the area, the research additionally investigated the late Holocene of the Baringo lowlands to provide a basis for the discussion on risk and resilience. A combination of remote sensing, foot surveys, excavation, and spatial statistic methods establishes a culture history for the region, showing that the Lake Baringo basin has been part of the pastoralist cultural sphere for the past three millennia and that the Rift Valley bottom possibly acted as a frontier between different archaeological cultures. By the end of the 18th or the beginning of the 19th century the area was occupied by Ilchamus. They established densely aggregated settlements and a vast irrigation system in order to enmesh themselves into the local, regional, and global exchange system. Through the exchange system, they would ensure their ‘social survival’ and build social contracts as part of their resilience building strategies, which continued to be practiced even as the Ilchamus subsistence and habitation practices as well as the political situation changed. However, as archaeological assemblages and ethnoarchaeological and historical data show, throughout their 200-year history community conformity and consolidation were central forces in the formation of an Ilchamus identity and a strong community resilience.

The environmental degradation of the Lake Baringo area has been the subject of studies for almost a century with the subsistence practices of the local communities seen as a key cause for it. This research moves beyond blame but instead explores the options available and choices taken by the Ilchamus community in specific environmental and political contexts. I hope that this thesis provides some insights into new avenues of exploration of how we can develop and strengthen the resilience of vulnerable communities, such as Ilchamus.