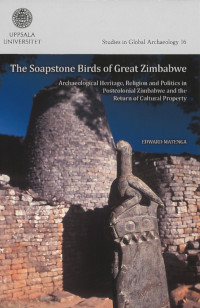 The Soapstone Birds of Great Zimbabwe – Archaeological Heritage, Religion and Politics in Postcolonial Zimbabwe and the Return of Cultural Property

At least eight soapstone carvings of birds furnished a shrine, Great Zimbabwe, in the 19th century. This large stonewalled settlement, once a political and urban centre, had been much reduced for four centuries, although the shrine continued to operate as local traditions dictated. The Zimbabwe Birds were handed down from a past that has only been partially illuminated by archaeological inquiry and ethnography, as has the site as such. This thesis publishes the first detailed catalogue of the Birds and attempts to reconstruct their provenance at the site based on the earliest written accounts.

A modern history of the Birds unfolds when the European settlers removed them from the site in dubious transactions, claiming them as rewards of imperial conquest. As the most treasured objects from Great Zimbabwe, the fate of the Birds has been intertwined with that of the site in a matrix of contested meanings and ownership. This thesis explores how the meanings of cultural objects have a tendency to shift and to be ephemeral, demonstrating the ability of those in power to appropriate and determine such meanings. In turn, this has a bearing on ownership claims, and gives rise to an “authorized heritage discourse” syndrome.

The forced migrations of the Zimbabwe Birds within the African continent and to Europe and their subsequent return to their homeland decades later are characterised by melodramatic episodes of manoeuvring by traders, politicians and theologians, and of the return of stolen property cloaked as an amicable barter deal, or a return extolled as an act of generosity. International doctrines that urge the return of cultural property are influenced by Western hegemonic ideologies. Natural justice is perverted, as stolen property acquires a (superior) significance in its new context, which merits the extinction of the original provenance. This leaves “generosity” and goodwill as the promises of the future, holding the fate of one Zimbabwe Bird still kept in exile in South Africa.