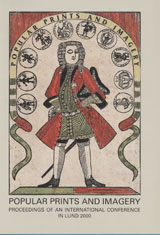 The study of popular prints and imagery has seen increased development in Europe since the 1960s especially in Germany and Scandinavia. A first attempt to bring together European scholars around the theme of mass-distributed pictures was held by Sociéte Internationale d´Ethnologie et de Folklore (SIEF) in Lund, Sweden in 1984. In October 2000 the sixth conference, focusing on Popular Prints and Imagery, was organized by the Royal Swedish Academy of Letters, History and Antiquities and the publisher Natur & Kultur.

In this volume 22 ethnologists and art historians from 11 different countries publish their contributions. The richly illustrated volume contains studies of pictures from the sixteenth century until today from Italy to Norway, from Holland to Russia. Some papers sketch the historical background, others give national examples of different kinds of production. Many others deal with motif studies and iconographical aspects. Together the papers, written in English and German, cover a broad field of research.

The volume is edited by Nils-Arvid Bringéus and Sten Åke Nilsson, professors emeriti and fellows of the Royal Academy of Letters.